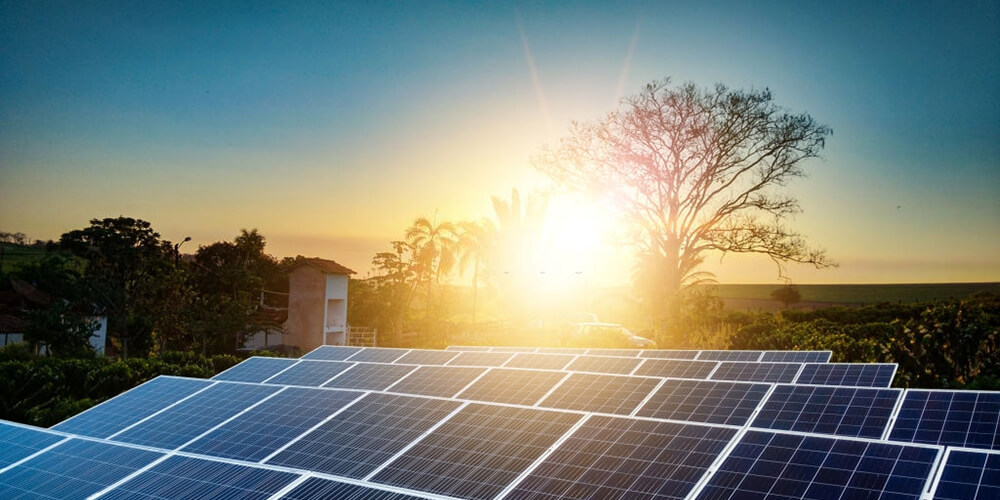 Solar panel technology has come a long way from what it was just a few years ago. The discovery of solar power and the ability to convert the energy from the Sun into usable power for our own use has proven to be a breakthrough in the field of environment friendly technology. Solar Photovoltaic panels are comprised of many small photovoltaic cells – photovoltaic meaning they can convert sunlight into electricity which can be used to power your homes and businesses. Photons are particles of light that are released from the Sun and when photons hit a solar cell on a solar panel, they knock electrons loose from their atoms. If conductors are attached to the positive and negative sides of a cell, it forms an electrical circuit. When electrons flow through such a circuit, they generate electricity. A solar panel for a solar power system are made up of many cells, and multiple panels (modules) can be wired together to form a solar array by placing solar panels one after another. The number of solar panels installed on a roof determines energy you can expect to generate from your solar power system.

The Photovoltaic power generated by solar panels is improving and the cost of going solar is dropping rapidly. Solar power systems are gaining increased popularity over the years with advancements and developments made in our ability to harness the Sun’s abundance of energy.

Photovoltaic (PV) solar panels are made up of many solar cells. Solar cells are made of silicon, like semiconductors. They are constructed with a positive layer and a negative layer, which together create an electric field, just like in a battery. PV solar panels generate direct current (DC) electricity. With DC electricity, electrons flow in one direction around a circuit.

With AC (alternating current) electricity, electrons are pushed and pulled, periodically reversing direction, much like the cylinder of a car’s engine. Generators create AC electricity when a coil of wire is spun next to a magnet. Many different energy sources can “turn the handle” of this generator, such as gas or diesel fuel, hydroelectricity, nuclear, coal, wind, or solar.

Any electricity that is generated by the solar panels and not consumed is sent to the utility grid through the utility meter. The utility meter measures the flow of electricity from the grid to your property and vice versa. When your solar energy system is producing more electricity than you end up consuming, this meter actually runs backwards, and you are credited for the excess electricity generated through the process of net metering. When you are using more electricity than your solar array is generating, you pull supplemental electricity from the grid through this meter, making it run normally. Unless you have gone completely off-grid through a storage solution like a solar battery, you will need to pull some energy from the grid, especially at night, when your solar array is not producing power (Solar panels require sunlight to generate any power). However, much of this grid energy will be offset from the excess solar energy you generate throughout the day and in periods of lower usage thus making a solar power system a great investment.

Solar power is especially beneficial for all savings it allows homeowners and business owners make by using the abundant energy from the Sun rather than relying on the high priced electricity generated by traditional sources of power like fossil fuels. Solar power is the most abundant source of energy on Earth and a great alternative to non-renewable sources of power. About 173,000 terawatts of solar energy strike the Earth at any given time which is more than 10,000 times the world’s total energy needs. It is clear that the Sun produces exorbitant amount of energy and by converting this solar energy into usable electricity for your home or business, solar energy proves itself to be a key solution in combating the current climate crisis and reducing our dependence on fossil fuels at the same time.

Contact Austra solar today for a free quote on a Solar power system for your home and start saving!

How to Combat the Rising Price of Electricity in Australia

Benefits of installing a solar battery in Perth, WA